Normally I do not comment on business, but when good things happen they need to be commented on just as much as those negative comments that seem to quickly float to the surface.

Almost two years ago we had the bottom of Zeta completely redone because of the blistering that had occured in the barrier coat.

Wayne, at the Shelter Island Boatyard, went to Pettit and asked them what method and materials they would suggest.  The hull got soda blasted, a new barrier coat applied and new bottom paint.

Twenty plus months after the job was completed we noticed that the blistering was occurring   again.  Wayne hulled out Zeta, brought in the Pettit "experts" and analyzed the situation.  The experts walked away and said it was not their fault or problem.

Wayne did not miss a beat and said the yard stand's behind their work and would solve the issue.  After some further research Zeta was pulled out for a two week process.  This time the bottom was granite  blasted so the surface would become more pitted then smooth.  Several coats of an aircraft type epoxy was applied, then the bottom paint.

Once again she looks great.  Wayne's parting comment as we shook hands was that he did not plan on seeing her again and repeating the job for a third time.  He felt that things where done right this time around.

It is not a good idea to add extra holes in the hull, but sometimes a system has to be changed to function properly.

The galley sink was originally designed to drain into a holding tank (this was per the European standards for certification).  Not a great concept when it comes to food waste from doing the dishes (the tank could become more foul smelling then a black water holding tank).

So, a couple of years ago we changed out the drainage so that it went into a sump tank then via an automatic pump overboard.  System worked great until the tank needed to be cleaned because of the gummy mess and microbes that accumulated.  At times the automatic pump would pump the waste overboard, but would not shut off because the float switch failed from all of the gunk.

Thus to the title of this entry.  We cut a one inch hole in the side of the hull abeam the sink, installed a SS thru hull fitting, a SS valve, and matted this to the sink plumbing.  As a precaution to external wave action against the hull, a simple flapper style check valve was installed vertically as the last fitting before the sink drain.

The system is now simple and is working great.  No more smell or maintenance and the system drains great.
Posted by Zeta at 9:21 AM 1 comment:

The original start batteries gave up the ghost.  Nine volts per battery was never going to start a 24 volt system.  So with a bit of muscle, ugh, we removed the 85+ pound batteries and replaced them with two that are supposidly guaranteed for four years.
Posted by Zeta at 8:56 AM No comments: 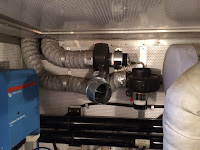 I never understood this for a multiple of reason's.  Both ducks where at the aft left side of the engine room.  The ducks where too close together (thus the "fresh air" sucking in the "exit air".  If the "fans" where not on then the flow was about zero. 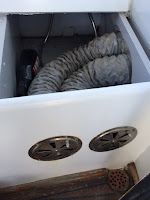 Now both Fans in the engine room suck air from the left aft side of the engine room.  To decrease the friction of the ducting, the ducting in the aft deck area has been removed so the air from both ducts now flows into the box seen above and out through the vents.

A hole was cut on the forward right side of the engine room and air is now ducted directly into the engine room, and has a fan to aid the flow when necessary. 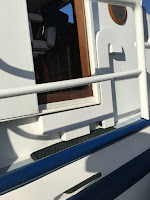 The ducting on the outside of the engine room.  The "bend" in the ducting helps keep water out, and the black area in the forward "box" is a one way  scupper valve to remove any water that may get in. 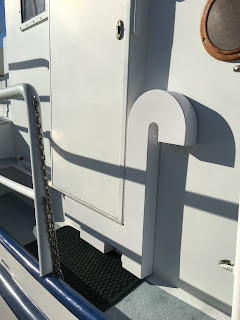 Getting out of Jail!

It was time to get out of jail.  Last year I cleaned up the hatch glass protector’s, only to have the rust come back again.  There are too many small area’s that are difficult to treat.  Then on top of that, the front hatch glass decided to crack.

So to solve both problems I decided to replace the system with 3/4 inch plexiglass that was easier to seal and does not require the protection that the glass did.

After being on the dry for two weeks while the her bottom was reworked, we came back to the slip to find a new neighbor.... A little on the TIGHT side.